We have been lucky to get reservations at many of the character dining locations. In all we’ve had 9 reservations, 8 different character sets, in 7 restaurants across the Walt Disney World resort. The amount of time the characters can spend at each table makes these dining experiences worth every penny in my mind. Here’s is part 1 of our adventures in character dining:

Cinderella’s Happily Ever After Dinner at 1900 Park Fare

We were all pretty tired from waking up for our very early travel day. We were ready for a good meal and then bed. The buffet here was stocked with several types of meat, many side dishes, and plenty of options of the kids. You will find overflowing basket of chicken fingers on every single character buffet I’ve been to at Disney World. This was no exception. (If it does empty out the Cast Members will very quickly bring it back to overflow status.)

My favorite thing about eating at a buffet is that it’s OK to be picky. I can put a small sampling of food on my plate and if I don’t like it I haven’t “paid” for a plate that I’m stuck with. I can still replace it with something that I do enjoy eating.

At this meal Grumpy has six plates of roasted chicken! I’m certain there was broccoli or some other veggie there too. (I should note we were rather confused about the dining plan when we had grabbed lunch earlier in the day so he just didn’t get anything for himself.)

The step-sisters were hysterical! Little Peanut even got a kiss, complete with lipstick to wash off. We left the meal feeling full and happy.

This is another meal that we were hesitant to book due to the African inspired flavors expected. I booked and hoped we would find something to eat.

In 2016 Animal Kingdom closed early at 5:30PM and our reservation was at 5:25PM. The restaurant was emptying out as we were sitting down to eat. There was just a small number of tables filled with guests. I cannot count the number of times the characters came around to the table. At one point Grumpy and Peanut had taken a walk for more food and Mickey sat down at the open table next to us and was trying to get Diva’s attention. As I was taking their picture Goofy appeared behind me and we took our own (no-so-great) selfie. Daisy the tried to convince the kids to join the party train around the restaurant but they weren’t interested.

As for the food we had plenty to eat! The carving station was filled with a red and white meat. I had several plates full of the beef they were serving. It was unbelievable! I believe the white meat was a turkey, but whatever it was Grumpy was loving it.

The 2017 visit was a little different since Animal Kingdom had now added night time activities and was open into the late evening. We had a dinner time reservation that we ended up pushing it back. Originally we were supposed to have a package to get preferred seating at the new Rivers of Light show. The reservation that was available to change to didn’t have the package but that was okay because we weren’t convinced we had to see the show. We moved to a late dinner at 8:00PM. When we arrived it was definitely more crowded than the prior year– both in the park and the restaurant.

I was nervous that this would change the interaction with the characters but not one bit. We had plenty of character time and multiple visits. Our server let us know it was Goofy’s birthday! He’s one of Diva’s favorites so she was sure to say happy birthday and he gave her the biggest hug for knowing that it was his birthday!

I feel like the characters at Tusker House have been the best on each of our trips. 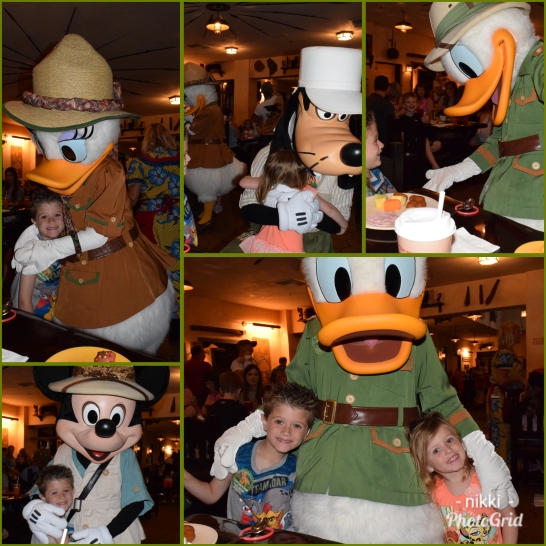 The food the second time around was a little less appetizing, but still filling. There were different meats at the carving station this time that I didn’t prefer as much. There was chicken on the buffet and pork at the carving stations for Grumpy to eat. We both found the pork to be too dry. He also didn’t love the seasoning on the chicken.

The kids love the kids’ section of the buffet which features good ol’ chicken fingers and fries. At least with the buffet I can attempt to get them to try something by putting a little piece of a different food on their plate. Diva did try the different salads and Peanut was open to trying the different types of breads available. At least it was something.

Now to decide if we go back on the next trip. Hmmm…

A Buffet with Character at Crystal Palace (Magic Kingdom)

I have a very mixed opinion of Crystal Palace. We walked in in the restaurant was beautiful. We were seated at a table that wowed us immediately. We were overlooking the river and the sign to Adventureland. I thought this was going to be spectacular!

Winnie the Pooh and Tigger were such fun! Tigger was bouncing around with the kids, making fun of Grumpy’s hair, and even joked he’d sign Grumpy’s face. He was just so silly. Winnie the Pooh was rubbing his tummy and looking for hunny. Eeyore was very… well Eeyore-like. He was sluggish and sad. Piglet was cute.

The food was very disappointing. I feel like most Disney buffets are pretty comparable in what they offer with a few variations but while the food look the same it lacked any flavor. Coming from a picky eater that of course sounds bizarre. I did try a variety of things from meat and potatoes but nothing was appetizing. Grumpy was also not very happy. We left and actually said it had been our worst meal of the trip. I want to go back to see the characters again but I don’t want to waste the money for food that’s not appealing.

Chef Mickey’s is one of the ultimate Disney meals. It’s one of the first that I knew of in my research and it’s a very popular one. It’s the one meal that has all of the Fab Five: Mickey, Minnie, Donald, Goofy, and Pluto all in one location. Reviews that I had read say it’s noisy and full of activity. They are not wrong. It’s Disney though. It’s a restaurant full of kids just waiting to meet Mickey Mouse! So it’s exactly what I would expect.

Before entering there is a PhotoPass opportunity with a statue of Chef Mickey. It’s almost as popular as meeting the Mouse himself. There is a fairly fast moving line for the picture.

Our seat here was at a very awkward spot close to the buffet and on the edge of the main walking path. Often as we were taking pictures with the characters we were in the way of passerbys.

Every character was great. We especially like meeting Pluto since we hadn’t seen him anywhere else (though he does meet in the parks). They spent plenty of time with us even helped when we had an unfortunate drink spill.

This was a brunch meal. Three out of four of us LOVE breakfast food. We ate so much!! Since chicken wasn’t an offering Grumpy ate mainly ham, yogurt, and fruit. But for the rest of us there was bacon, sausage, eggs, fruit, and Mickey waffles!!!! There are endless amounts of Mickey waffles. It’s almost enough reason to spend the entire morning here.