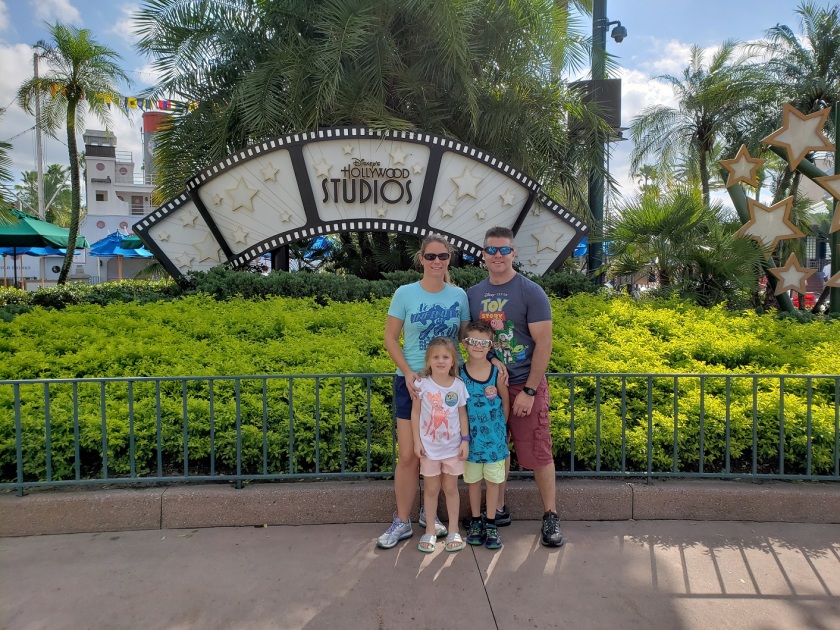 Our second day was set to be one of our early Extra Magic Hours days. I always prefer morning because fewer people tend to get up early than are willing to stay up late for the evening hours.

I had showered and went to get breakfast while everyone else slept. I quickly learned that the warm breakfast options weren’t being served yet so I grabbed some snack items and went back to the room to wake everyone up and get cereal ready.

We started out pretty good by getting out of the room at 7:29am. I had checked the app and it listed that buses WERE scheduled from our resort to Hollywood Studios at 7:33, but when we got to the bus stop the sign was blank and the Cast Member sent us to take the boat. We went outside to watch the boat pulling away. It could be anywhere from 10-20 minutes before another one showed up. By that time we could walk to the park, so that’s what we decided to do. I missed the turn to walk along The Boardwalk Hotel because I was too busy just admiring the huge arch sign entrance to the area and we turned next to walk along the Swan and Dolphin path. As we were walking we came upon an empty bus. We had a very short exchange and decided to catch a ride.

What seemed like a good idea was actually not. Swan and Dolphin was the first stop on the bus route. It was already 7:40 when we boarded the bus. The driver was fun and chatty as we waited what seemed like forever to see if anyone else needed a ride before we made the next stop at The Beach Club, where no one was waiting. Then back to where we had started at Yacht Club. Two ladies joined us and finally we started on our way (again) to Hollywood Studios. Along the way, we learned our driver has family in Ohio somewhat nearby where we live and visited once during the winter and saw snow in person for the only time in his life. The kids were in disbelief! He also gave us some tips for the Halloween party and told us he goes to the party and then passes out much of the candy he receives at home on Halloween night. This was later a tip that we greatly appreciated.

After all of the chatter, we arrived at Hollywood Studios. I gathered some of our things to exit and ended up dropping my camera and jamming the lens. That only added to the frustration that it was already 8:08 and the park had already opened for Extra Magic Hours. There was no way we were going to try to make it Slinky Dog Dash. The wait time was already over an hour and climbing. The kids weren’t going to have that kind of patience first thing in the morning. Even if we weren’t going to wait to ride Slinky we still HAD to check out Toy Story Land first! We had only seen pictures and last May when we visited the model.

Toy Story Mania was posted at 60 minutes, but I had been using Touring Plan’s Lines App and it was expected to be closer to 20 minutes. Had the wait been sixty minutes we may not have even noticed since there was so much to take in while waiting. So many nostalgic toys and games and Andy’s artwork. Grumpy and I loved the Uno cards used throughout but only managed to get a halfway decent picture when we returned in the evening. 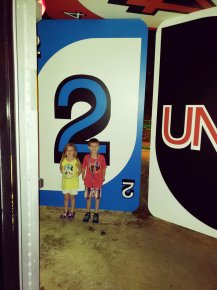 We did manage to find the Instagram favorite “popsicle stick wall” at the exit of the ride. It’s a rather difficult place to snap pictures between each mass exodus of the ride.

By this time it was minutes before the actual park opening so we needed to make our way out of Toy Story Land before the new crowds started flowing in. We couldn’t leave before taking a PhotoPass picture with the Land in the background. There were two Photopass lines (which I noticed a few times during our visit). The front line gets a close-up view with Woody and the sign and the back line gets an overall view and more of the crowd wandering in the picture. I won’t wait for PhotoPass in the early in the morning because it wastes park time, but since there was only one family with the photographer in the back we stopped.

As we walked away we passed a Cast Member warning guests of Slinky’s 110-minute wait! 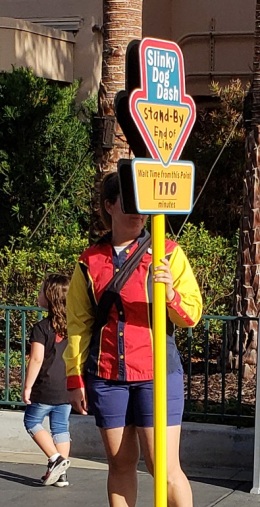 We headed to Animation Courtyard to take a peek at what Vampirina’s meet and greet line might look like on her very first day meeting in the parks. It wasn’t wildly out of control, but not worth the wait. So Diva asked to see Doc McSutffins and then Pluto. Peanut decided he didn’t want to meet Chewbacca and just wanted to check out Star Wars Launch Bay. We went in not know what it was. He enjoyed the history and news in the videos. I’m indifferent to Star Wars so the video was a bit long and the props at the end were not entertaining.

Next, I had to conquer another fear– The Hollywood Tower of Terror. Our FastPass was waiting to be used and I was even more terrified to head here than the Haunted Mansion the day before.  Between the words “haunted” and “terror” this one was sounding more frightening. The kids had no idea what was ahead. Luckily, Peanut had been focused on reading the Magic Kingdom map rather than Hollywood Studios. As soon as we entered Diva noticed something was different and said: “This is creepy!” and she clung onto us. Peanut just took everything in and I nervously waited. Grumpy was unphased, as usual. The pre-ride video and being locked in a room didn’t spook me as much as the Haunted Mansion did. The eerie corridors leading to the elevators were a bit nerve-wracking though. When our elevator arrived there was no turning back. We entered and unfortunately had a back row seat so all of our reactions aren’t captured. You may have to watch several times to glimpse Diva between the front row’s waving hands and Peanut in the left corner.

The end result: Diva and I laughed like crazy. Really. She was laughing so hard and continued even as we exited the ride. On the other hand, Peanut was stating that he was never riding again. The kids argued back and forth about whether it was a good or bad ride and Diva proclaimed she’s going to ride “every day!!” as we made our way to our next FastPass on Star Tours. After his one and only ride on this in 2016 Grumpy now opts to sit this one out.

We had a short debate about whether to meet Olaf before or after lunch, but our reservation time was too quickly approaching for a meet and greet. So we checked in for our 11:25 reservation at Sci-Fi Diner ten minutes early and were seated within just a few minutes. 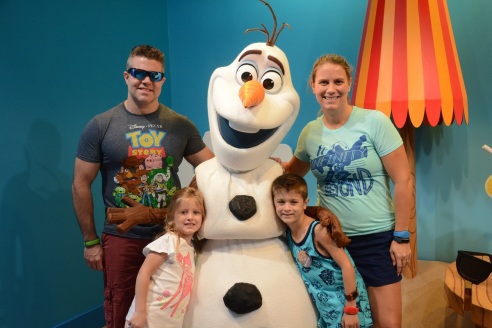 Following lunch and some warm hugs from Olaf we were marching back into Toy Story Land for a FastPass on Alien Swirling Saucers. Grumpy took one look at the ride and decided to sit this one out too. The kids and I loved it though! It did more swaying and swerving than spinning, so I decided it would be safe for Grumpy to try later. 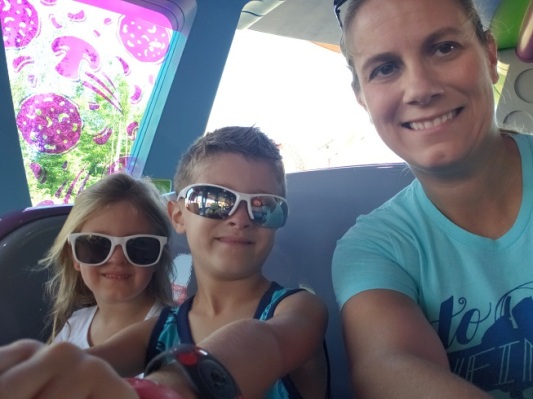 Time for a break. The line for the boat was insane! It backed almost all the way to the park entrance. We were going to walk and take the short way this time. Twenty minutes after leaving the park we were back at the resort. A much quicker trip than the morning.

During our break we were checked out some FastPass options to see if we’d head back to Hollywood Studios or hop over to Epcot. Peanut was dying to see Indiana Jones again and wanted the whole family to make it. I locked us in for the 6PM show and we spent a few hours relaxing at the resort before catching a bus back to the park. We went straight to Indiana Jones. I had missed the show last year but Peanut let me know it was action-packed. It was and very funny too. Peanut was just as amazed a second time around.

We made our way into Toy Story Land for the third time of the day. The Green Army was on patrol as we came in. Grumpy was willing to try Swirling Saucers with us so we got in line for what was supposed to be 20 minutes but ended up 30 minutes. Toy Story Mania was walk on! Yes, literally wind through the queue and walk into the loading area. Woody and Jessie had a line a mile long but almost no one was waiting for Buzz so we took a minute to show off our muscles.

We were supposed to go back to the resort to get some rest to wake up early and celebrate Diva’s birthday by attempting all four parks in one day, but getting snacks and seeing fireworks sounded like a better plan to the kids.

There was a lot of view area in front of the Chinese Theatre so we made ourselves comfy as we waited. We hadn’t seen the projections for the show in the past, only the amazing display of fireworks that we stumbled upon in 2016. I knew the show had changed since then but I was rather disappointed. There seemed to less pyrotechnics and a lot of talk/projections. The fireworks weren’t nearly as amazing as we had enjoyed and I thought they were a little light by Disney standards.

I also would have preferred the view from Hollywood Boulevard or back at Crossroads of America again. We were much too close and spent time turning from side to side to see the fireworks all around. 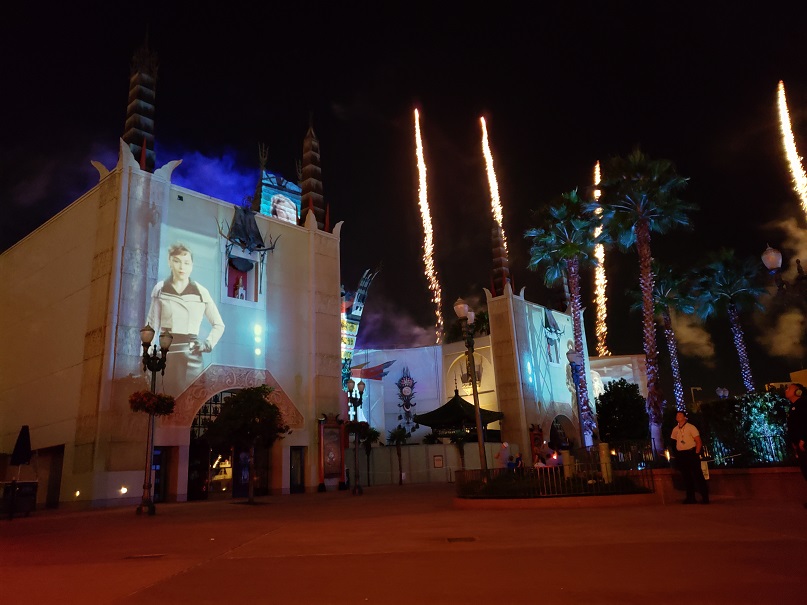 There was no question in our mind our transportation back was going to be our own two feet again. The walk was a little longer with thicker crowds exiting the park but once we escaped to the walkway to Boardwalk we picked up the pace. Diva went to sleep in the stroller and Peanut dozed a bit.

We settled back in the room before 9:30. Our second fun-filled day in the books already and a big one coming up next.