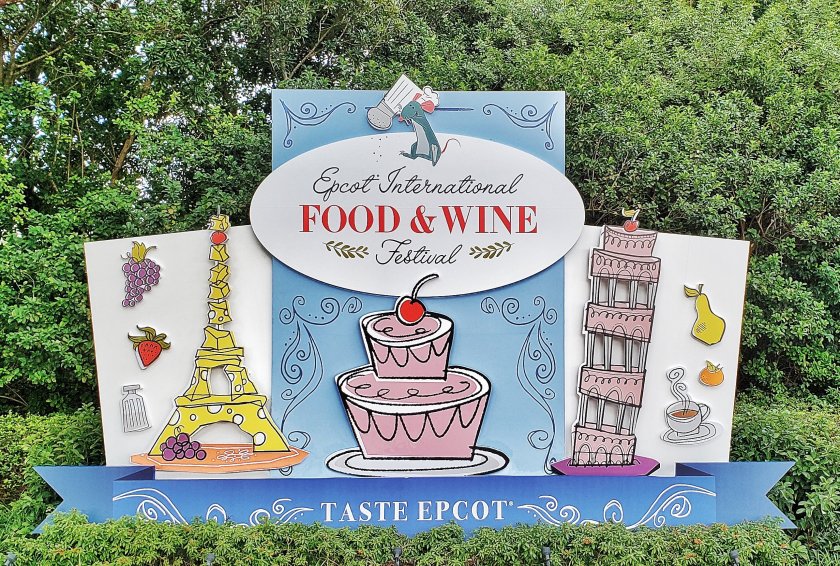 The second half of our trip started with a beautiful early morning walk around Crescent Lake to the Boardwalk to eat breakfast at Trattoria al Forno. The views from every angle of the lake are amazing.

While on the Boardwalk side of the Lake, Grumpy spotted the painted words on the Ample Hills Creamery building and immediately started time my arm saying “It’s all you!” I started to get a picture but Diva insisted on joining me.

He is absolutely correct. I do not turn down ice cream and if I do it’s probably because I’m sick. Sadly, we never made it to Ample Hills while it was open. Maybe on another trip.

We casually strolled around the Lake taking in the quiet scenery. The kids requested to run play on the beach once we were near the resort so they spent a few minutes running and playing in the sand while I relaxed the on a swing and Grumpy headed back to our room.

The plan for the day was to visit the countries in Epcot in the morning and hop over to Hollywood Studios in the evening. There was plenty of time before the countries even opened. I tried to organize the room a little better and Grumpy and Peanut worked on some of his schoolwork. I snapped the cutest picture of them before they caught me.

This was the first trip that we really made it a point to spend more time in the countries. There was no schedule for our time at Epcot and lunch was consisting of snacking around the world at some of the Food & Wine Festival booths.

We can’t miss the PhotoPass photographer in France. We already had one from this trip but Peanut wants a picture with the Eiffel Tower every time we pass. In the end, I’m happy we took this picture, but more on that a little later.

The first food stop was in France to try Creme Brulee. We ordered just one for everyone to sample. It was a little over-crisp on the top. Each kid took half a bite of the inside and turned away from it. Grumpy and I shared the rest but didn’t feel the need to head back for more.

Next, onto Belgium for a dessert, my mouth had been watering for since I first saw the menus were released: a Belgian Waffle with warm chocolate ganache. I’m salivating again just thinking about it. They also had one with a berry compote on it. We had plenty of snack credits some just for the purpose of hitting up the booths so I ordered both to try.

After having our fill of chocolate waffles we stopped in the American Adventure for a funnel cake. While we snacked on it we wandered around hoping that maybe there was be a Character Training sessions but nothing happened. So on to Japan we went!

Our biggest mistake in the past had been walking by the countries but not going inside to really see what’s going on. In the Japanese Pavilion, there is a beautiful bridge around a koi pond, an interesting display of anime, a KidCot stop, and “pick a pearl” in the rather large shop. Pick a pearl has a whole ritual from choosing an oyster, counting down, and sizing the pearl. I didn’t know how much went into it but I absolutely loved it!

While we were waiting our turn a cast member chatted with Diva and told her that the “ugliest oysters have the most beautiful pearls.” She also talked to us about the variety of colors of the pearls. I admired a silvery/gray pearl on a necklace in the case. She mentioned those are very rare.

Peanut and Grumpy had been wondering about the store but met us while we were still waiting. Peanut convinced Diva to pick the shell he liked the best. Finally, it was Diva’s turn! The just less than five-minute video shows the ritual and you can hear my reaction when we saw it was a silver pearl! The cast member that had been helping us was so excited about it.

It was the biggest pearl of the day to that time. Sadly, all that’s left of the experience is the video and these couple pictures. We aren’t sure when or where it was lost. Grumpy put it took it from Diva so it wouldn’t get lost and we have not seen it again. Disney’s Lost & Found did not locate it.

After all the excitement in Japan, we continued walking, the skies were getting cloudy but we had more countries to see. A stop in Italy was fun to watch a street performer. The kids had fun coloring at the KidCot station and Grumpy and I peeked around the store looking for a “Topolino” shirt to bring home for a souvenir. Grumpy later told me overheard the two KidCot station Cast Members complaining in Italian about the crowds so far that day. It was busy but I didn’t feel overly crowded.

We stopped in Germany for only a few moments to get a passport stamp. We breezed by Norway since we’d been there earlier in the week, but stopped at the shop stationed across from China for the kids to buy puppets they had been talking about since Monday.

The clouds were a little more threating now so luckily, Mexico was not too far away. Everything for Mexico is located inside the pyramid. It has always looked fairly boring when we walked by in the past. Inside was unbelievable: shopping, dining, and Donald’s boat ride. Oh, and let’s not forget the Coco decor that was put into the foyer not long after the movie was released. The bright colors throughout take away from the low-light inside. We peeked in the shop, stopped at another KidCot station, and then took a relaxing ride on Donald’s Grand Fiesta Tour. As we headed out of the pyramid Diva stopped for a picture with Miguel and Dante at the ofrenda while Peanut was customizing Hector from the color of his eyes to the clothes he was wearing and a little bit of face paint too.

When we were back outside the rain had passed and the sun was shining. From the size of puddles and the rain-soaked stroller cover, there must have been a bit of a downpour while we were inside. We were just about to make our way back through World Showcase but passed Donald’s line. It was really short and we jumped in it. The kids took several silly pictures with Donald and their puppets. I was so excited to see the pictures but when they loaded they were of another family. I completed a “Lost Photo” form on Disney’s website after we returned home. I submitted our Photopass from France earlier in the day and they found TWENTY-ONE pictures!! Here are a few gems!

I can honestly say we really enjoy our time traveling the World in Epcot! We saw so many new and different things in just over three hours we spent there. Things we had definitely overlooked in the past. Peanut really enjoyed getting his Passport stamped in each country. Later in the evening, he asked me to take a picture so I could send it back to his teacher that had asked us to send updates to the class while we were away.

I considered one more chocolate covered waffle before we left but ultimately passed since I was still full from the snacking earlier. We exited International Gateway for a short break before an evening at Hollywood Studios!