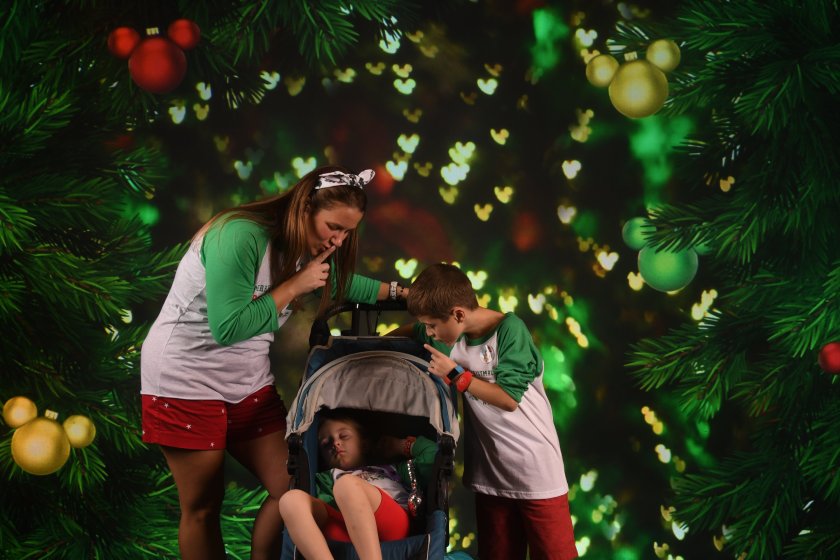 Surprise! I woke my kids up at 4AM Thanksgiving morning to tell them we’re heading to Disney World!

I had wanted to go Thanksgiving a few years ago and had found great flights, a good price on a room (friends & family rate), but then park tickets for a very short trip weren’t cost-effective, so I scrapped the plans. Now, with our annual pass, there was no question I wanted to make this trip. When I saw a flight opportunity in October, I jumped on it. It was 42 days until Thanksgiving. Resort availability was very limited. I decided to look at something different and check out the Disney Springs Resorts that are Official Walt Disney World Hotels. These hotels would provide the same perks (60 FastPass+ reservations, Extra Magic Hours) and also provide shuttle service to and from the parks. After deciding on the Best Western as the best value I also decided that I could wait 42 more days to tell the kids.

I immediately got to work on making FastPass+ reservations for our stay since I had passed the 60-day mark and picked up a couple dining reservations. At the very last minute, I decided to make some shirts for all of us as well.

I had been gone November 13-18 for the Royal Treatment Travel Retreat. When I returned there were 10 days to unpack from traveling solo and re-pack for traveling with the kids. Since the trips were so close to together they didn’t really think much of the luggage still sitting in my bedroom or the MagicBand I hadn’t taken off. (It’s really common to deal with the Disney Blues by keeping the MagicBand on for days after returning.)

I was nervous I would slip or that they would catch on to me packing their stuff, but I did it. It was still a secret when I quietly tiptoed into their rooms to wake them. Despite their grogginess there was excitement to go. And later, once they were more awake a lot of questions as to why I didn’t tell them in advance. The excitement, however, never wavered.

My husband dropped us at the airport on his way to work. By the time they got there they were more awake and asking lots of questions.

I foolishly thought they would sleep on the airplane, but was very mistaken. Our inbound flight actually took us to Tampa. The flight was filled with even more questions as I continued to give the rundown of our long weekend trip plans. A friend also flew on the flight and drove us to Orlando. The entire drive was gray and cloudy until about two minutes before we arrived at the Walt Disney World main gate. It was like the magic switch for our trip was turned out. Blue skies greeted us at the gate! During the drive I also checked the app for any FastPass+ changes and was able to get Slinky Dog Dash. The kids were now elated.

We very quickly settled into our hotel, picked up our stroller and grocery order, then headed to the bus stop. I was pleasantly surprised that our transportation was not a typical Disney bus, but a coach bus, like the Magical Express. It was a much comfier ride!

We visited Hollywood Studios just for our FastPass+ on Slinky Dog Dash. It was the best start to the trip. They asked if we could start every trip on Slinky going forward.

Next, our plans took us to the Skyliner for their first ride. They were hooked on that too.

We visited the Beach Club Resort to see the Christmas decorations, namely, the Gingerbread Carousel. The design work continues to leave me in awe just as with the Gingerbread Cabin at Wilderness Lodge and famous Gingerbread House at the Grand Floridian.

The plan for this visit was to do a LOT in a short time. From the Beach Club we took a bus to Disney Springs. It was our first ever visit to this area. The first thing to do was a live video giveaway! I had been running a giveaway entry on my Facebook page and Thanksgiving Day was the day the winner was going to be announced. I had my little helpers assist in the video. They gave a great recap of the day.

Bowling is something my kids love to do. My husband though is normally the one that takes them since I’m not a great bowler and the best times to go are usually during my work days. I knew an late lunch/early dinner at Splitsville would be a fun way for them to spend the holiday. The meal options were also very not Thanksgiving which I was happy about. We spent nearly 90 minutes laughing, bowling, and chowing down on pizza and chicken fingers.

We were tucked away at a corner table on the second floor of the restaurant. I loved the space that we had. More than enough to eat, play, and just move around without being in anyone else’s way. Towards the end of our second round of bowling Diva asked to sit in the stroller. What she really meant was she was going to fall asleep.

Peanut and I walked around Disney Springs, checked out World of Disney, the Lego Store, and the Pin Trading Store before going to what I really was at Disney Springs for: The Disney Springs Christmas Tree Trail! I’ve seen pictures of these trees for years and now I could finally walk the trail myself. The little Diva was fast asleep by the time we were on the trail and there was no way she was waking up. We made sure to prove she “saw” her favorite trees though by including her in some of the pictures.

Before taking a walk back to our hotel we stopped in the PhotoPass Studio for a few pictures too. We made sure to include the sleepy girl in some of these too. I love how they turned out.

Best Western is one of the “furthest” hotels from Disney Springs. (Double Tree Suites across the street is the other.) Being the furthest, still wasn’t very far. It was about a 10 minute walk back to the room. It was still much quicker than waiting for and taking a bus back. The minute we walked into the room was when Diva woke up.

We took a few minutes to clean up and they asked to head back to Hollywood Studios to see the “light show” (Sunshine Seasons Greetings) I had told them about. We jumped back on a bus to the park. The driver that dropped us off confirmed the buses run a pretty timely schedule of every 30 minutes, so we wanted to time it just right so we could catch a ride back and not wait too long.

Hollywood Studios was glowing with Christmas everywhere as we walked back into the park. We enjoyed all the decorations and some PhotoPass stops to capture the moments. We had enough time watch all the scenes of Sunset Seasons Greetings and they played in the “snoap” that they thought was the coolest thing!

In just under 60 minutes we were back at the bus stop and very soon back at our hotel. It was 8pm and 2 out of 3 of us had been up all day. The sign at the entrance was pretty much our motto for the day we had and the days ahead. They actually asked for this picture.

I’m fairly certain less than 15 minutes later we were all in dreamland!

Are you ready to visit Walt Disney World? Need to book your vacation package or just buy tickets? I can help!

As an agent with Royal Treatment Travel I offer free planning services when you book your Walt Disney World vacation with me! Request a quote now!