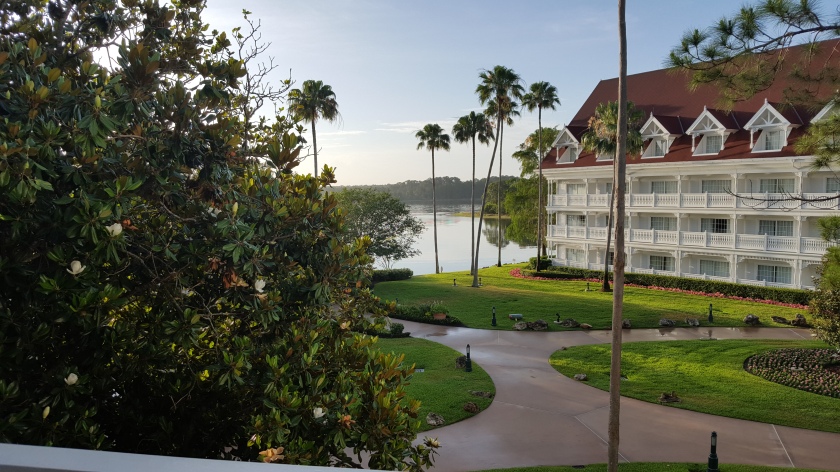 I never once had the Grand Floridian on the list of places to stay. The price point was far out of budget. No use even window-shopping this resort. We did have a dinner reservation here in 2016 and found the property to be nice, but felt a little out of place. We are not posh people, so the Grand Floridian didn’t seem our style.

Very shortly before our 2017 departure airfare dropped significantly for a Saturday night flight instead of a Sunday morning flight. I changed the flight right away thanks to Southwest’s no change fees policy. The next call was to update our Disney reservation. But there wasn’t availability at Port Orleans-Riverside where we were scheduled to spend the week. There wasn’t much availability anywhere. But there was a special… “I have a Deluxe property available. Are you sitting down?” The agent asked me.

It’s amazing the thoughts that can run through your mind in a matter of seconds. This was going to cost an arm and a leg. I’d love to stay Deluxe, but my budget is not deluxe. I was going to end up spending much more than I saved on airfare for this. But could it be Animal Kingdom Lodge? That would be exciting. Maybe it’ll be at the Contemporary and we can walk to Magic Kingdom.

Then she said I could stay at the Grand Floridian. Oh, okay. Bubble burst. That was at the bottom of my imaginary deluxe dream list. And at the top of the price list. Now, what am I supposed to do for the night because I know I can’t afford this? But then she gave me a price. A price I calculated to be approximately 74% off! Holy crap!? Pinch me, please. Is that real? I did actually ask if she was joking. It was less than my airfare savings. And less than I could stay almost anywhere else near Disney or MCO. Sure, we’ll do it.

I’m still not super enthused. But it’s Disney property. We get to take Magical Express. We’re one Monorail stop from Magic Kingdom. It’s only one night.

Only one night ends up being the worst part.

Then I thought about it. I realized by the time our plane arrives and we calculate travel time to the resort we might make it to watch Magic Kingdom’s new Happily Ever After fireworks.They start at 9:00PM.

We had a flight delay leaving from Columbus. Grrr!! It was short but still was chiseling minutes away from the likelihood of catching the fireworks.

7:08PM: We landed at MCO. I didn’t have a room ready text or assignment in the MyDisneyExperience app. I’m hoping nothing is wrong with our reservation. It still feels too good to be true for that price.

8:38PM: First, we have to make a stop at the Polynesian to drop off other guests. The coolest part about going there was driving under the Magic Kingdom sign! I took a quick (but blurry) pic of Poly at night to send to a friend who dreams of staying there. I loved all the tiki torches lit up outside.

8:48PM: We’re standing in line at the Grand Flordian’s front desk behind about three other groups. I’m debating if we wait now or go to the fireworks. I really don’t know where to go so we wait.

The Cast Member at the front desk was very pleasant. She asked what our plans were and I mentioned that we were hoping to see the fireworks. She instantly sped up the pace. It wasn’t like she felt rushed or that she was rushing us. She wanted to make sure we would make it. “Outside your building is the perfect view!” A quick overview of the resort map and away we go.

It was a big chance with tons of variables, but it worked out beautifully!

We then dropped our carry-ons in the room and changed to swimwear. Yes, you read it right: we changed to swimwear. First, a quick bite to eat sitting by a small marina looking towards Magic Kingdom. The Castle and Space Mountain were sparkling in the distance. I could have sat there all night. It was the perfect view.

Now there’s nothing else left to do when it’s already more than two hours past bed time then to test out the pool! 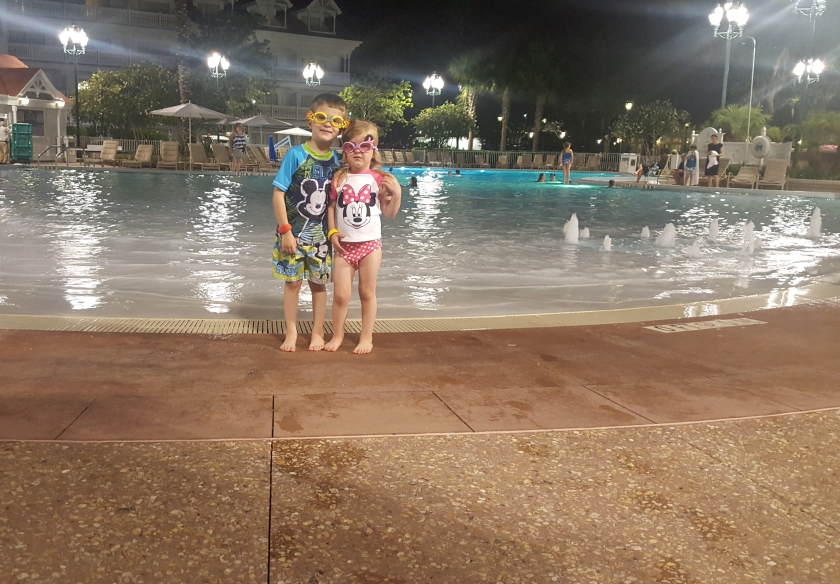 It was quiet and relaxing. We stayed for almost an hour then it was time for all of us to rest.

I like the convenience of having Magical Express get our luggage and I was hoping it would be in our room by the time we got back. It can officially take “up to 3 hours” for delivery. Unfortunately we were at four hours without delivery. Not a huge inconvenience because I anywhere I travel my carry-on has clothes for the night and next day, sometimes two, swimwear (if needed), and basic necessities.

The kids were wired, but once they got settled drifted to sleep in no time. 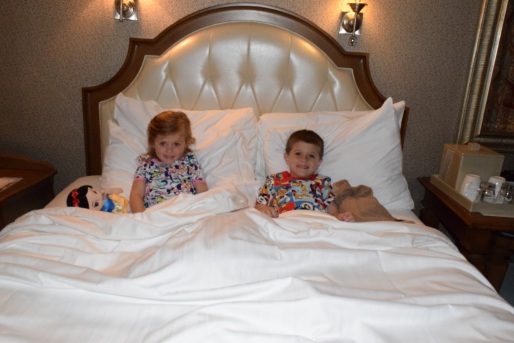 At the time I wrote and posted my recap to the Facebook group I belonged to it was after midnight and five hours without luggage delivery. It arrived shortly after.

I wish I had more pictures of the room. It was so spacious and comfy.

In the morning Peanut used the balcony to eat breakfast and do his vacation journal and homework. (He asked to do it. Really!)

I mean, who wouldn’t want to be out there with this stunning view:

We had a relaxing first morning. The night before we had realized that one of the kids left a portable DVD player on the Magical Express. Grumpy had reported it to the front desk while I was getting the kids settled into bed. I had a early morning call that they found it. They offered to bring it to the room but we had to go to pick up our Amazon order and stroller from Bell Services anyway. The staff was super friendly. A few cast members made small talk with the kids while the others went to retrieve our items. They insisted on carrying the water back to the room even though I had the stroller that it could ride in. When we were ready to head to Magic Kingdom they were very prompt in arriving to get our bags for transfer to Port Orleans-Riverside.

Taking the monorail to Magic Kingdom was the best convenience. Going through security there was much faster than at the park.

The Grand Floridian was not the stuffy place I thought it was going to be. It is elegantly designed but also comfortable and welcoming. It has gone from a location that wasn’t even on my radar to a place I would love to stay again and again!