Our Epcot day started with a meltdown—over a map! Oy. As we walked to our pre-park reservation at Akershus the kids got in a fight over a map. The map ended up in the garbage. Diva ended up in tears.

We’ve already starting the day with one phone, now a meltdown. Hmm. Please get better.

We made it to Akershus. A few minutes behind after dealing with the map issue. By the time we were walking out the Frozen line didn’t look like something we wanted to spend time waiting in, so we just went to see Elsa and Anna instead.

The attitude is much better now, so Diva and I can finally get pictures in our matching outfits. We rocked our pink princess skirts, courtesy of my mother-in-law.

She wants to meet Joy & Sadness but the line is a little too long. So we’ll try again later.

It’s another scorcher of a day at an early hour. I knew May was going to be warmer so I had scoped out a lot of “cooling” options for the family. We spent a lot of our morning in the Land and Nemo buildings. We rode Living the Land and Peanut and I went on Soarin’. OMG, I love Soarin’! We spent some time walking through aquarium, taking the required picture with Bruce, the share, riding The Seas with Nemo, and laughing at Turtle Talk with Crush.

Now we have to split up. This is going to be rough. We can’t communicate with each other by phone for several more hours. Grumpy has no sense of direction. We have lived in the same city for 10 years and he still passes the turn to the grocery store on occasion. Epcot is a huge park. I gave him very specific directions to meet me at the bridge in front of France and the Eiffel Tower. We will meet at 2:00PM. I’m nervous. I checked three times that he had a park map and understood where France was in relation to Test Track and the other countries.

Diva and I take another ride on Nemo while the boys are off to Test Track. We took a short stroll around World Showcase and looked for snacks to use as our lunch. She went to sleep. So I had a little fun with the Photopass photographer at the bridge while I waited.

They were late. 10 minutes. 15 minutes. I’m getting anxious. Maybe he isn’t clear on where the bridge is. I walk the bridge back and forth. Thankfully the Diva is sleeping so she’s not adding to the anxiety. She’s not asking hundreds of questions about where they are. 20 minutes. Still not here. Do I leave? Will they go to the hotel? Um, probably not. I’m just going to sit here and wait. I’m holding my phone thinking maybe, just maybe, he might ask someone to use their phone to call me. No calls. No messages. What the heck do we do?

I’m at the bridge looking into the crowd of people walking from the United Kingdom. He’s got to be coming this way, no way he’d be walking all the way around the Showcase. I’m pacing with the stroller and trying to stay in the shade.

Finally, I see them! They stop walking and he looks at the park map. I’m on my way. We’re reunited. Peanut is excited to see me! They hadn’t been walking long. Test Track had some delays and their FastPass+ wasn’t so fast.

Their snacks for lunch are cold, but edible. Diva is still sleeping. We need to take a break back at the pool.

And finally, phone service returned. We waited a few minutes after the 24-hour window just to make sure there wasn’t a longer lockout period.

We went back to Epcot mainly for dinner at Via Napoli, Illuminations fireworks, evening Extra Magic Hours, and we still had to meet Joy & Sadness. 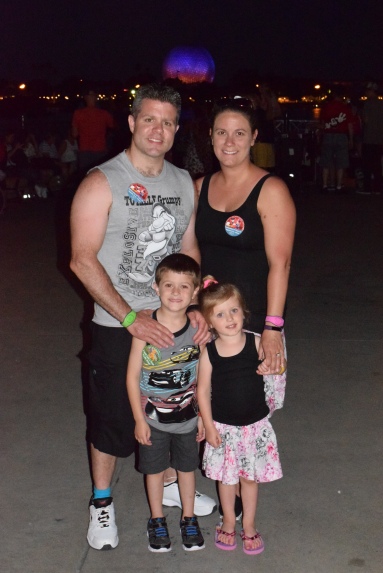 We brought glow sticks with us and spread some magic by passing them out to the kids while we waited for the fireworks. It kept the kids entertained and brought smiles to many faces. Illuminations was good, but not our favorite fireworks show.

Now, I made a promise to a little girl many hours ago that she was going to meet Joy today. We had plenty of time to utilize the Extra Magic Hours for it. Joy was our first stop. We took a leisurely walk back to the front of the park. We scanned in to confirm we were resort guests and got in line. As we made our way through the winding queue it happened again– those five words that are never good in line– “I need to go potty.” We were getting close, but it wasn’t moving fast enough. We had to take the chance.

Diva and I actually ran to find a bathroom. I’m sure there had to be one closer but I just found the first I could. She was quick to go, wash hands, and run back. As we’re running back she was asking if we were going to make it and I said “I promise you’re going to meet Joy!” We made it it! There are still a few more groups waiting.

Then, she met Joy (and Sadness). Her face was just pure joy! 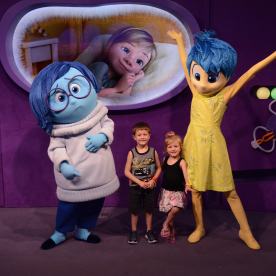 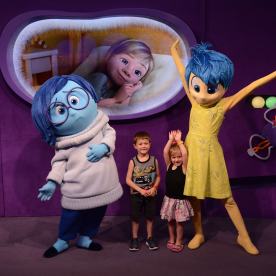 As we left their meeting area and walked to use our rider swap pass on Soarin’ she yelled over and over “Best Day Ever!” It’s a moment that brought tears to my eyes. I made her little dream come true. After some rough moments it was truly amazing.

Then there’s that moment that you think will bring it to a end… Peanut yells at her to shut up because he’s getting tired and cranky. She doesn’t care. She only gets louder, “Best Day EVER!!”

We convince Peanut to take Grumpy on Soarin’. Diva and I ride Livin’ the Land. She’s still massively excited and telling me how she met Joy. We waited for the boys and watched the wait sign for Soarin’ drop. It’s near closing time. Maybe I’ll ride with him one more time. Nope, he’s not in the mood.

To the buses we go. There was a mass Exodus. The line for the bus to Riverside is so long. The line to the sister resort French Quarter is non-existent and the bus is there. We jumped on it and had a seat! We’ll find our way to our room eventually.

It was a short ride back. Peanut was dozing on the bus and in the stroller once we disembarked. Diva was still on a high. She walked along the Sassagoula River still talking about the “Best Day Ever.” It was now well after 11:00PM and she was just in the best mood. I needed to stop at the hotel’s front desk to pick up an Amazon delivery and she wanted to go with me.

There’s no better way to end the Best Day Ever then with an episode of the Mickey Mouse club. Picture timestamp is 11:32PM.