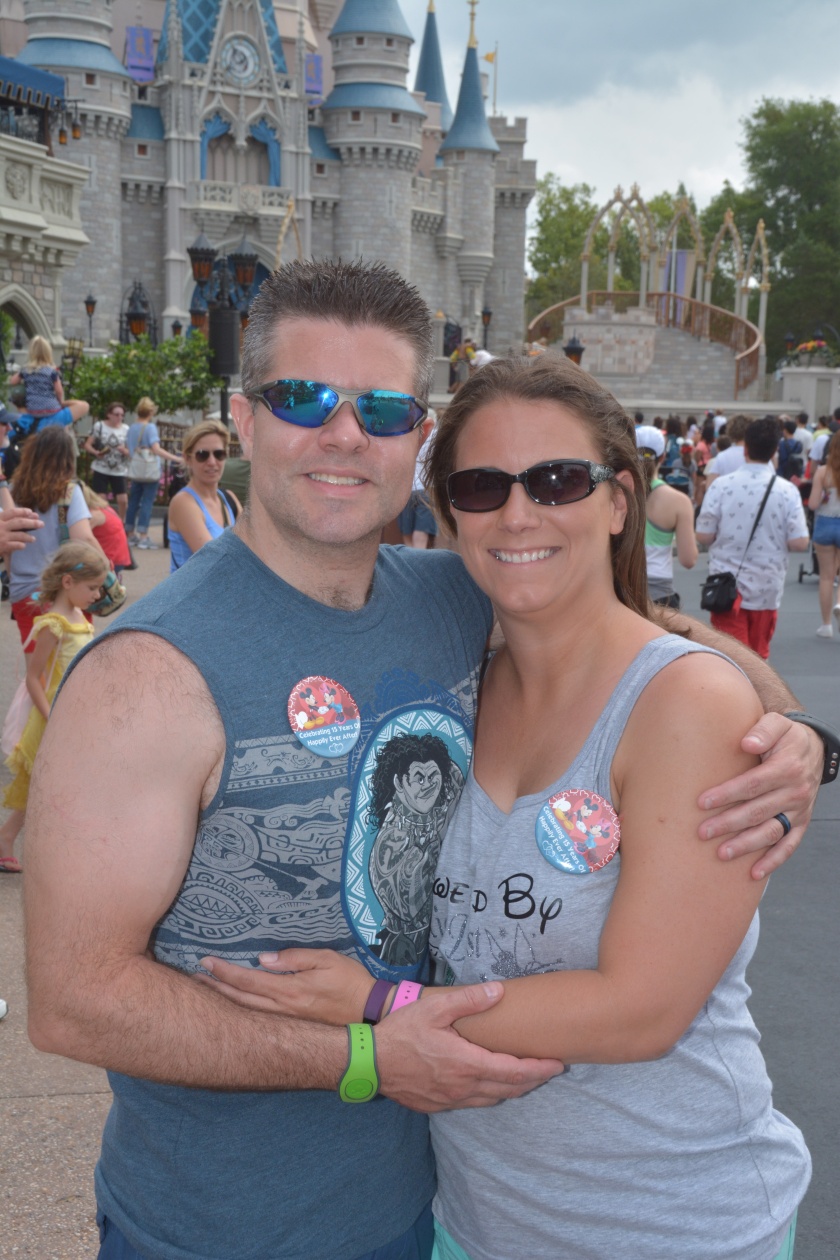 Grumpy and I celebrated our 15 year (together) anniversary at Magic Kingdom. Heat and rain would factor into our day again.

We were taking it easy today. After a late night and the cell phone fiasco over the prior two days we just needed easy. We were at Magic Kingdom. What could be better?

Diva wore her Disney Diva shirt. She had been asking each day to wear it so she was thrilled it was finally time. We had the perfect opportunity near the Castle. 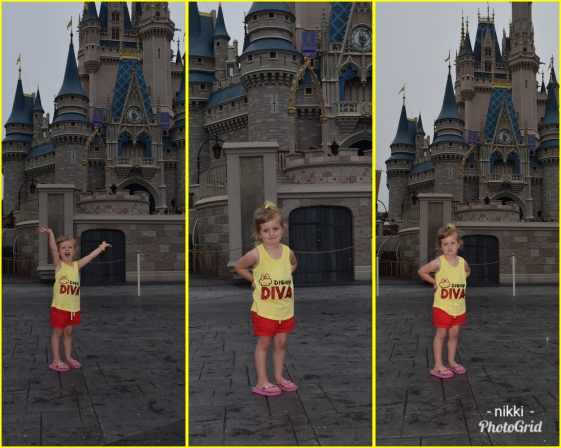 The morning started with a some princess meet and greets: Tinkerbell (ok, so technically she’s a fairy), Elena, and Cinderella. 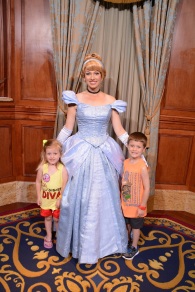 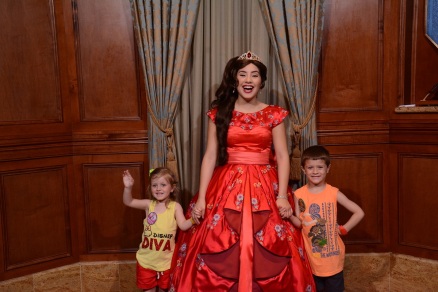 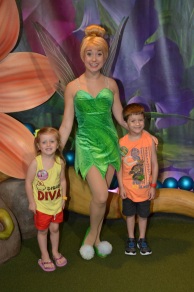 We took a spin on several of our favorite rides– and of course that means we rode the Barnstormer and Buzz Lightyear’s Space Spin a few times each. The boys are always very focused and a little competitive too!

We also looked for some new things to try. The wait time for the Mickey’s PhilharMagic was less than 10 minutes. We really didn’t know what it was, but it was inside and there was air conditioning! Nothing else needs to be said at that point. We all really enjoyed it. The kids played along with the animations. Peanut even tried to reach out and catch Donald! We jumped when we were splashed with water. It was good to be surprised and entertained.

It was our anniversary but we were doing everything the kids wanted to do with little plans. We had used 2 of our 3 FastPass+ and then cancelled the third to grab something the wanted to do.

As the sun was getting hotter it was time to leave for a break, but of course we didn’t make it before there was a meltdown. I’m not even certain what this one was over. As Diva cried we pushed the stroller passed the flag pole where Chip and Dale were just leaving from their meeting. One of them (sorry, I can’t tell the difference!) stopped to try to make her smile. It was random and sweet. She, on the other hand, was not sweet. And it didn’t help. At least he tried.

We came back in the evening for you guessed it.. rain. I really do enjoy walking into the park while the masses are walking out. Our evening took on a short trek through Adventureland to ride the Magic Carpets and the Jungle Cruise before going to the hub to catch the Move It, Shake It, Dance parade and GENIE!!!!!!!!!!!! But Grumpy wouldn’t get out there and dance. He loves to live up to his moniker.

We had dinner reservations for Be Our Guest. Generally speaking we are pretty fast eaters. In my house if you’re not someone will probably steal something off your plate. But we ate our meal pretty leisurely this evening and then waited patiently to meet the Beast. He was very proper and polite.

After dinner it was time to stake out a spot to watch Happily Ever After up-close this time. It was nothing short of amazing!!! We had to be in the Hub to see the projections on the castle. It was very crowded. Ok, that’s an understatement. We were jammed in there with no place to move. It didn’t matter since the show captures all the attention. LOVE! 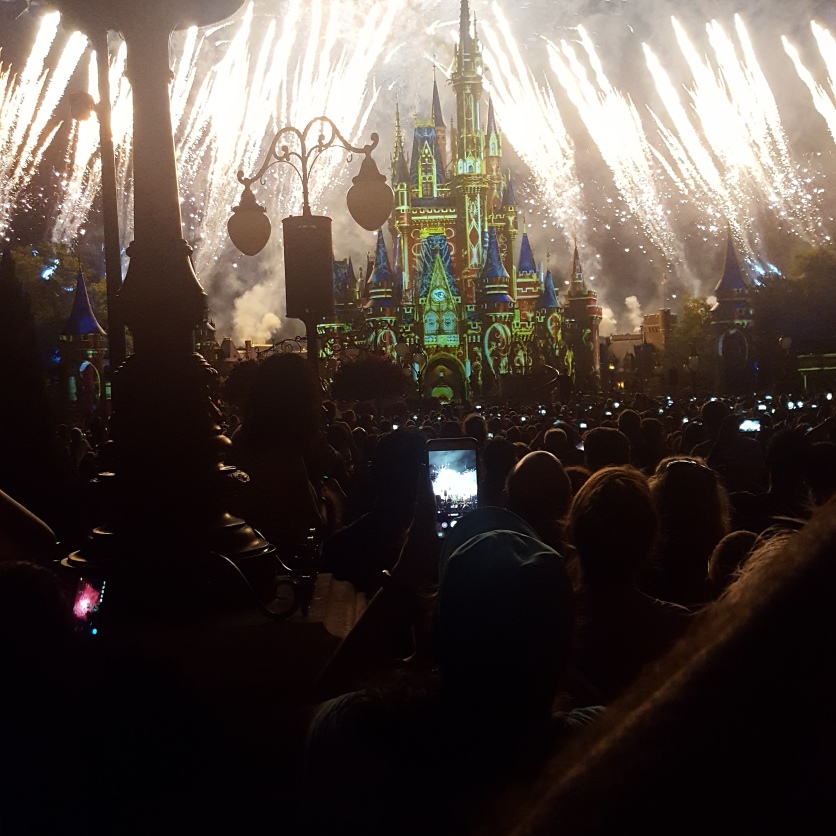 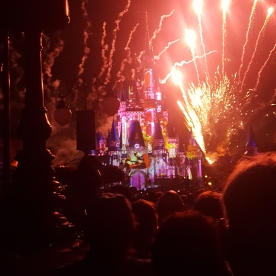 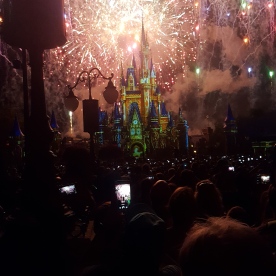 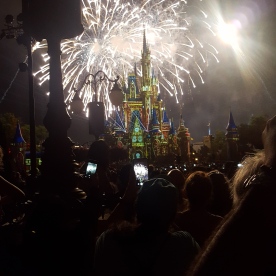 The park still had a few hours before close. I wanted to get a new Photopass picture that had recently been promoted. It was only in the evenings. We moved slowly with the mobs of people disbursing from the hub. While we were waiting in line we chatted with a younger girl in front of us. She said the kids were really cute and then handed us four any time, any ride paper FastPasses! She said she was in the College Program and leaving in the morning. She liked spreading the magic. We thanked her many times.

Then we got this adorable shot of the kids and a nice family picture too. 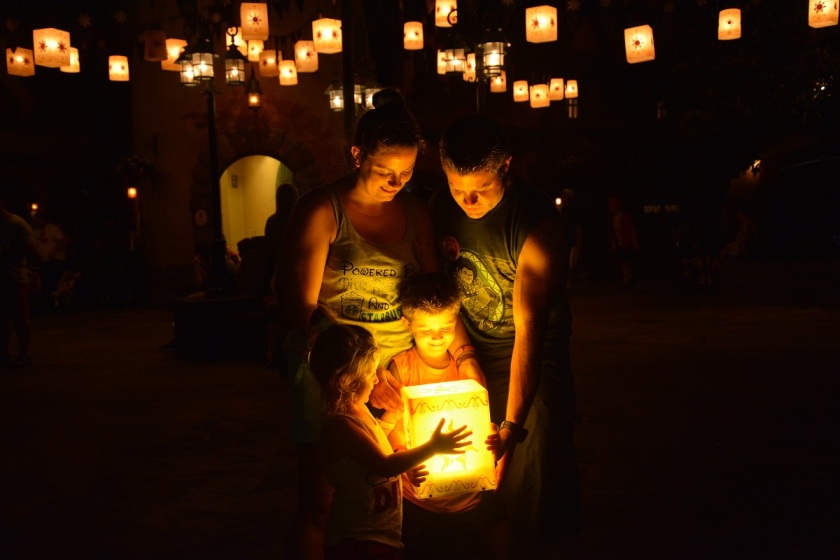 We let the kids decide what they wanted to do with the gifted FastPasses and it was a unanimous decision to ride “Heigh Ho.” It was a great end to the night!