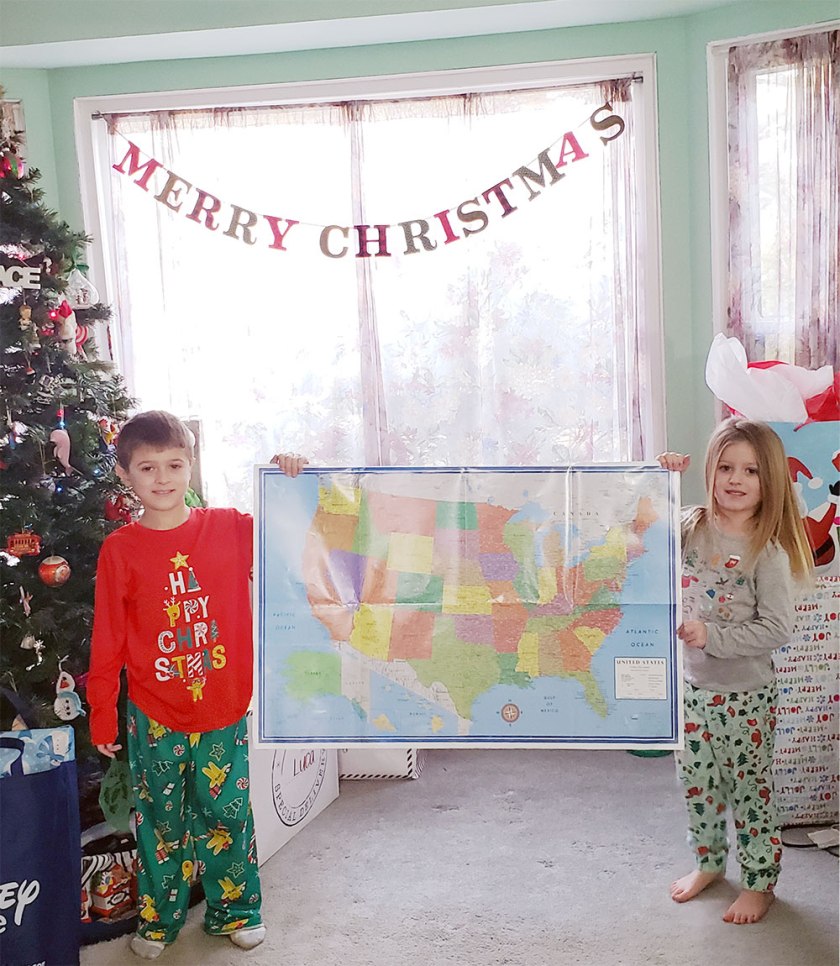 My favorite gift we gave the kids this Christmas was a map. Peanut was pretty excited about it but Diva didn’t really understand. Her brother did a great job explaining it to her. Then I did some explaining to them. We’ve done a lot of talk about traveling, but it’s time to stop talking and start going!

I can’t take credit for the idea though I can’t believe I hadn’t thought of it before. I saw Leah from Five for the Road Blog post a picture of their map and I knew we had to get one. I even had the perfect spot in our house to put it. I went to my Amazon app and put in the order:

We definitely need to add a small world map. I’m thinking about the placemat size one.

The kids were excited add the map tacks. Right now they don’t cover a huge area, but we’re going to work on that. We’ve basically covered most of our home state of Ohio. I also added some for the places Grumpy and I have been before/without the kids.

I remember growing up and traveling regularly. My dad was a truck driver for many years so being on the road was commonplace to him. We took three hour drives to visit his parents and other relatives. We drove to visit his sister over an hour away. We drove for vacation. I have so many memories on the road.

Some of them include arguing with my sister in the back seat until she went to sleep. I played the license plate game, got annoyed with the high volume of JB Hunt trucks I saw, and followed along on the map that my dad would check at every rest stop.

I remember climbing nearly 300 stairs at the Bunker Hill Monument. I remember a pit stop in Rhode Island. I spent time playing in the sand. And my most favorite vacation memory is riding waves with my dad at Cocoa Beach. He pulled me on my raft and an empty raft as far as he could swim and then we’d catch the biggest wave and ride to the shore just to go do it all over again.

My dad is gone now, but I still hear his laugh that day we were in the ocean and clearly see his hand holding my raft ever so tightly. I have always wanted my children to have memories like these to hold onto many, many years from now.

And I still have his old briefcase full of the maps we followed to hold on to as well.

My Grumpy husband did little traveling growing. He tells me he remembers one trip to Niagara Falls that was “a good time” and asking to stay home while the rest of the family went to Washington DC. He will gladly admit that he is very content staying at home in his normal routine of working, going to the gym, and doing “things” around the house. He can find something new to “fix” or tinker with at least once a week.

I can’t not travel so we’ve had a fair share of trips in our nearly 17 years together. After taking Grumpy trips with and without kids to a variety of US and international destinations, I think he’s finally on board with taking a little more time away from home. Last summer we visited Niagara Falls (both New York and Canada) and every zoo in Ohio! Now we’re working on a road trip to Washington DC and other areas along the way this summer.

This definitely does not mean we are done with Disney–at all! Though you may see a few non-Disney posts on this blog. (I was originally going to call it Nikki’s Mickey Trips, Chatter, Tips and Travel, but it was too wordy and took away from my main focus.) While a 2019 Walt Disney World trip is not booked right now I’m still trying to work one in. (Ahem, Grumpy, you better be reading this!) We even marked our three Disney trips by making a Mickey on our map!

Well, those possibilities are quite endless. My children have pretty lofty plans. Diva found Hawaii in a children’s book of the fifty states and now her heart is set on it. When I told her we could go to Disney for the cost of Hawaii’s airfare she just asked if she could go with the neighbor’s next time they went.

Peanut’s plans include Paris to see the Eiffel Tower and London. He has also requested to see the White House and go to Boston to see the Red Sox play. The latter two we can certainly manage in the short term. He is learning about new places constantly at school and asking me stories of my travels.

There’s so much to see and do and we want to start taking advantage of that.